Been A Long Time

I know its been a long time since I have been on here and I am sorry about that.  Not to much to report this time, but I will do my best to fill you in on what has been going on and even give you a tip on where to get a custom entertainment center of you very own.

My wife and I have still been pretty diligent about going to the gym except for a week off around Thanksgiving and this past week of trying to get ready for Christmas.  I have not done another check in on the scale yet, but I will do one after the holidays and I will let you know where I am at.

One thing that did happen over the holidays was a little electrical spike.  This little devil took out the mother board on my desktop computer.  My first thought was to get another mother board that was an upgrade to the fried one and just install it myself.  Then we went to BJ’s and wouldn’t you know they had a great deal on a really nice laptop.  I had planned on getting a laptop, but I had no Idea I would enjoy it as much as I am enjoying this thing.  My wife had set up a wireless network in our home and with the laptop I can use it where ever I want.  For instance, right now I am laying on the sofa typing this stuff.  We were so impressed with my laptop, we went back to BJ’s and got another on for her.  Of course I had to load all of my music on here and that took a little while.  I am a music freak and I have over 500 cd’s.  But now I have it all on my laptop and its all organized and labeled with the all the album art too.  I have also had to get the hang of this new Vista thing and it is actually pretty neat.  I know there have been some bugs and Microsoft is continually sending out fixes, but I am getting used to it and it looks alot better than the old XP.

I guess I should mention that we are going to embark on a flooring project over the Christmas holiday.  I will have before and after pictures and a full report on the process.  We plan to do the living room floor and tackle the kitchen some time after that.  All we have to do is pick out the tile and we will be good to go.  Stay tuned to see how it goes.

Now about the custom entertainment center.  I do not know if you are like me, but I have alot of home entertainment components which includes, two 400 disc cd changers, a receiver, dvd player, cd recorder, turn table, and the dreaded cable box (so want to get rid of comcast, but stuck for now).  I needed an entertainment center that would house all of this stuff and hold a 50″ tv.  A friend of mine from work actually built one that actually had the room for all my stuff and a drawer for the turntable.  All I had to do was give him the measurements that I needed for each compartment and he build an absolutely beautiful piece of furniture.  I am going to try an post some pictures of it on here.  He also built a subwoofer stand for me that actually matches the entertainment center.  Let me know what you think and if you want I can hook you up with the builder.  I think I got the pictures in and you should be able to click here…. 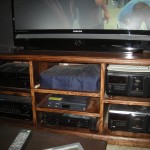 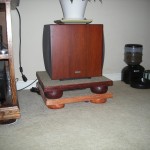 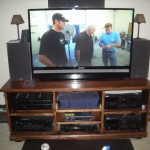 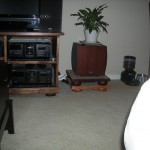 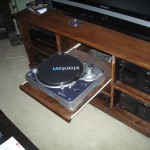